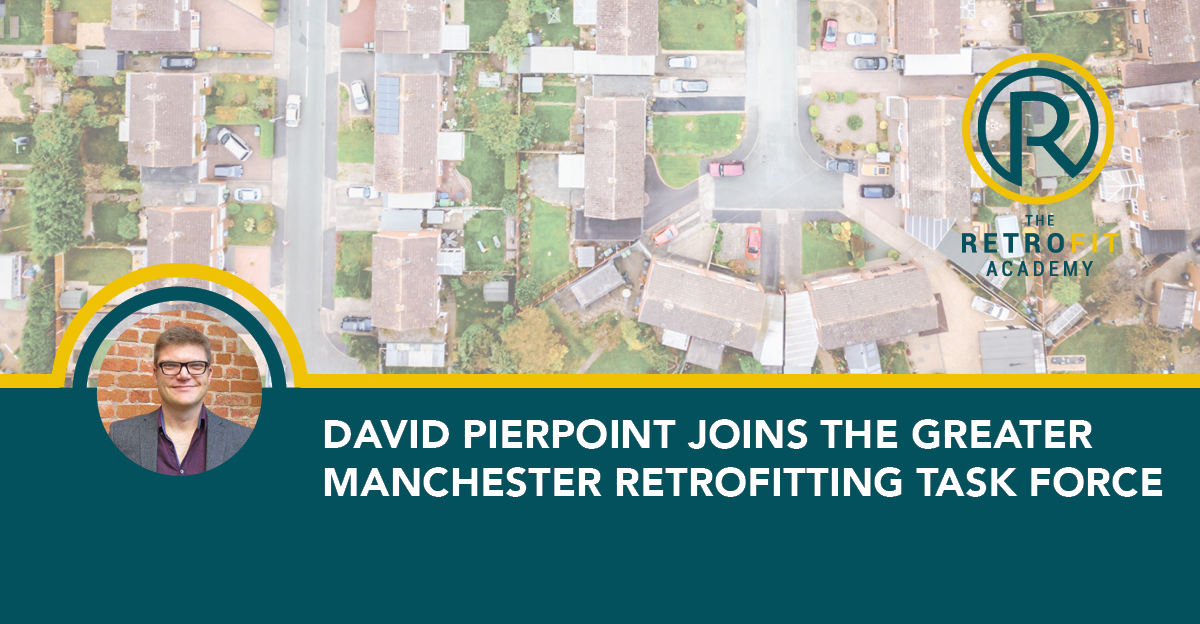 A new task force has been established by Greater Manchester Combined Authority (GMCA) to bring together local and national government, energy providers and industry experts to drive a revolution in low-carbon homes and jobs.

The task force will include representatives from local and national government, social landlords, building authorities, colleges, energy suppliers, industry experts and investors. Using the expertise and influence of its members, the Retrofitting Task Force will look to push forward a series of agreed actions and maximise investment and public funding, particularly to support those least able to pay for retrofitting measures.

I’m delighted to have joined the Greater Manchester Retrofit Task Force. Manchester is the ideal crucible for retrofit with the population. The cohesion and scale required to make this happen will be amplified by some great organisations and people on the ground.

Installing energy efficiency improvements is a key tool for tackling the climate crisis, housing crisis, and jobs crisis. The aim of the task force will be to outline how home and building improvements can take place on a mass scale, while identifying opportunities to boost new skills, create good jobs, and drive investment in low-carbon industries. All of these goals are designed to support a sustainable economic recovery from the pandemic and meet Greater Manchester’s target of achieving carbon neutrality by 2038 – 12 years ahead of the national target.

The work of the task force will build on funding already secured by the GMCA to run the Green Homes Grant Local Authority Delivery scheme, which provides grants of up to £10,000 for energy efficiency improvements for low-income households. To date, the GMCA has been awarded £27m by Government for the scheme, delivered in partnership across the city-region with E.ON.

To become a retrofit coordinator you need to have a qualification in a built environment subject that is at least Level 3 with a minimum of 12 credits (your credits should be detailed on your certificate). Level 3 qualifications are equivalent to an A Level certification. If you hold a university degree relevant to the built environment this would also meet the entry requirements for this course.

If you don’t hold a relevant Level 3 qualification or above you may be eligible to enroll in a pre-assessment with The Retrofit Academy to ensure you meet the academic standards required for the course. Failing this, you would need to attain the relevant qualifications.

Our fast-track learning option is ideal for quickly training your team, to get them ready to be able to work on retrofit projects within 4-6 months of accreditation. Using a bespoke mix of eLearning, bootcamps and seminars, this retrofit coordinator training can be designed to meet the needs of your business. As well as learning essential skills and knowledge, cohorts will benefit from networking with peers, and will gain a deeper understanding of energy efficiency and whole house retrofit.

This option is for self-organised learners but includes additional support from our expert tutors, and is backed up by an intensive two-day online bootcamp offering a comprehensive overview of the key learning objectives of the course.

Working in groups via Zoom, bootcamps are a great way for students to understand the fundamentals of Retrofit Coordination and Risk Management, and appreciate the importance of the coordinator role.

This option is designed for chartered professionals who are comfortable managing their own learning and wish to study at their own pace.

The course consists of 12 training modules assessed via a mix of multiple choice questions and written assignments; all accessed via our Online Learning Platform.

All teaching and assessment is completed online at the student’s convenience and you have 12 months in which to complete the course. Although no teacher-led lessons are involved, students will have support from an Online Mentor and Tech Support to ensure everything flows smoothly.

The new PAS 2035 standard works alongside the PAS 2030: 2019 standard, and introduces a set of criteria that must be met to ensure the consistent delivery of domestic retrofit in the UK.

PAS 2035 represents a strong commitment to improving the energy efficiency of domestic buildings in the UK. It was designed in response to the UK government’s Each Home Counts Review, which was a comprehensive review of home energy efficiency. One major outcome of the review was the call for an industry-wide Code of Practice, which became PAS 2035.

What is a retrofit assessor?

The retrofit assessor’s role is to gather information about the building that is the subject of retrofit work. Domestic retrofit assessments are very wide-ranging and include factors such as the building’s construction, structure, and architectural features. The assessment will also consider the building’s  current condition, including any structural defects, and issues such as leaks, condensation and mould buildup. Current installations such as heating and hot water, lighting, and ventilation will be documented. Any protected status, conservation restraints, or planning permission requirements will be investigated before work can begin.

The retrofit assessor must also take into account information regarding the number of  building occupants and special considerations including the presence of vulnerable people, or people with disabilities.

What is a retrofit coordinator?

In order to become PAS 2030 certified your business will need to demonstrate that you use a PAS-compliant Quality Management System (QMS) to ensure you have the correct processes in place to deliver consistent customer satisfaction and retrofit implementation.

Your installers will need to have relevant qualifications and competencies; each team will require a qualified retrofit professional, and one member will need to hold an NVQ . PAS 2030 certification requires you have up-to-date health and safety certification, and you will also need to comply with PAS 2035 when assessing and designing retrofit plans.

PAS 2030: 2019 has been redeveloped to work alongside PAS 2035. Both documents should be seen as working together to create a single cohesive approach to domestic retrofit. Taken together, PAS 2030 and PAS 2035 lay down the steps all domestic retrofit projects should follow to gain compliance, and ensure consumer satisfaction in accordance with the recommendations of the Each Home Counts Review.

What does the PAS 2035 specification cover?

PAS 2035 is a specification for what is called ‘whole-house’ or ‘whole building’ retrofit; this is an approach to the installation of energy efficiency measures (EEMs) which takes into account the requirement of the entire building; both from a technical standpoint, and considering factors like occupancy comfort.

PAS 2035 is concerned with assessing domestic dwellings for energy retrofit. This involves identifying areas where improvements can be made and specifying and designing the relevant improvement measures. It is also concerned with the monitoring of domestic retrofit projects.

PAS 2035 is to be used in conjunction with PAS 2030: 2019, which sets out the standards required for installing EEMs.

PAS’ stands for ‘publicly available specification’, and the number ‘2035’ refers to the government’s target date to raise as many homes as possible to Energy Performance Certificate (EPC) Band C. The average EPC for housing in the UK is currently Band D.